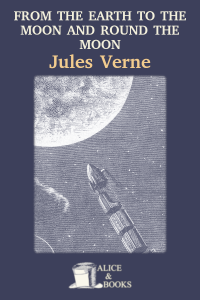 From the Earth to the Moon Book download in PDF, ePub & Mobi

From the Earth to the Moon is a scientific and satirical novel by Jules Verne, originally published in 1865.

Impey Barbicane is the president of the Gun-Club and, once the Civil War is over, he proposes to his companions to manufacture a giant cannon to send a projectile to the moon.

This project motivates the members of the Gun-Club. To carry it out, they will use the huge cannon called Columbiad and send a kind of spaceship with the aim of crossing space and landing on the moon.

Although it begins with a satirical portrayal of the stereotype of the American man of the time, the novel tries to deal with scientific rigor the difficulties and problems (shape of the projectile, cannon, amount of gunpowder to be used, location of the launch, etc...) that must be solved in order to actually send an object to the moon.

It should be noted that we are in the year 1865 and it would not be until a hundred years later when man was able to accomplish such a feat, which demonstrates the advanced and visionary thinking of Jules Verne.

The From the Earth to the Moon book is available for download in PDF, ePUB and Mobi

Jules Gabriel Verne was a French novelist, poet, and playwright.

Verne is generally considered a major literary author in France and mos...