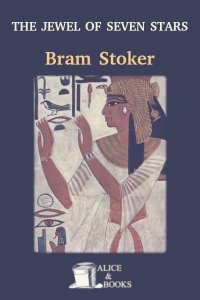 The Jewel of Seven Stars is a horror novel written by Bram Stoker and published in 1903. It had some success after its publication, due to its magical and mysterious theme, but it did not reach the fame and popularity of his other Dracula novel.

The book tells us, in the first person, the experience of a young London lawyer named Malcolm Ross after a relationship with a young woman named Margaret and her archaeologist father.

Said archaeologist, named Abel Trelawny, had as his goal the resurrection of an ancient ruler of Egypt with great powers named Tera. Suddenly, he is attacked by a force of unknown origin that leaves him unconscious and his daughter, along with Malcolm, will take care of him until he recovers.

There is great tension as both Malcolm and Margarent do not know Mr. Trelawny's intentions until he wakes up and tells them the true story. Magic and mystery surround the environment and go through the actions of the characters...

It all seemed so real that I could hardly imagine that it had ever occurred before; and yet each episode came, not as a fresh step in the logic of things, but as something expected. It is in such a wise that memory plays its pranks for good or ill; for pleasure or pain; for weal or woe. It is thus that life is bittersweet, and that which has been done becomes eternal.

The The Jewel of Seven Stars book is available for download in PDF, ePUB and Mobi

Abraham Stoker was an Irish author who is best known horror novel Dracula.

During his lifetime, he was better known as the personal assist...