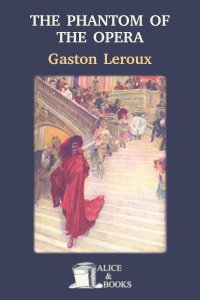 The Phantom of the Opera Book download in PDF, ePub & Mobi

The Phantom of the Opera is a novel written by Gaston Leroux and originally published in 1910.

The novel is narrated in diary form by Raoul de Chagny, a young nobleman who falls in love with the young singer Christina Daae, who has just made her debut at the Paris Opera. Raoul discovers that Christina is being stalked by a mysterious mask-wearing character, who calls himself "The Phantom of the Opera" and who seems to be totally obsessed with her.

Later, Raoul discovers that the Phantom is actually a man named Erik, a masked and deformed genius who once worked as an architect and builder at the Paris Opera House. Erik was madly in love with Christina but she rejected him because of his physical appearance, whereupon he vowed revenge on both her and the other workers in the building.

Now, years after her death, Erik has returned to exact his revenge....

Although initially presented as a terrifying figure, as the novel progresses Erik is increasingly shown as a tragic character, locked in his own world of darkness and loneliness.

It has been adapted numerous times for theater and film. The play is inspired by real events and George du Maurier's novel Trilby, and combines elements of romance, horror, drama, mystery and tragedy.

The The Phantom of the Opera book is available for download in PDF, ePUB and Mobi

Gaston Louis Alfred Leroux was a French journalist and author of detective fiction. In the English-speaking world, he is best known for writing the n...