Bartleby, The Scrivener is a story by Herman Melville and is considered one of his best works.

A Wall Street lawyer in New York, whose name is not known, tells us the story of Bartleby, the scrivener. This lawyer does a very good job managing property titles and mortgages for wealthy people. He has several employees reporting to him at the office as scriveners but is not enough, so he posts a job offer in an advertisement to hire a new employee. Bartleby is interested in the offer and sends his request, which is accepted.

The lawyer places Bartleby on a table by the window. Although Bartleby appears to be a hard worker and performs his tasks efficiently, he refuses to discuss a document with his boss, and he replies "I'd rather not" and does not perform the task. This happens for each new task requested by his boss, although the rest of the tasks are carried out very efficiently.

The situation becomes surreal when the narrator decides to relocate his office due to the impossibility of kicking Bartleby out. The new tenants of the office complain to the lawyer that Bartleby is still there, but he is unable to kick him out...

The Bartleby, The Scrivener book is available for download in PDF, ePUB and Mobi 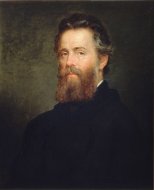 The best Bartleby, The Scrivener quotes

Imagine my surprise, nay, my consternation, when without moving from his privacy, Bartleby, in a singular mild, firm voice, replied, “I would prefer not to.”

All who know me consider me an eminently safe man. The late John Jacob Astor, a personage little given to poetic enthusiasm, had no hesitation in pronouncing my first grand point to be prudence, my next, method.

Nothing so aggravates an earnest person as a passive resistance.

To a sensitive being, pity is not seldom pain.