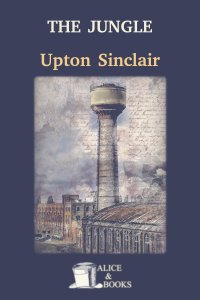 The Jungle is a 1906 novel written by Upton Sinclair. The book exposes the misery of the working class, denounces the working and living conditions and the desperation that this context causes in the workers.

The novel presents us the American dream of Lithuanian immigrant Jurgis Rudkus, who after emigrating to the United States begins to work in a slaughterhouse in Chicago. Contrary to what was expected, the working conditions are really harsh and they are barely able to survive. After getting into debt to buy a house, really humble, they can not pay the loan and are evicted losing the money delivered.

Upton Sinclair was so involved in the making of the novel that he worked for several weeks on a Chicago ranch. Despite focusing the novel on the working conditions of workers, readers were more concerned about unhealthy practices in the meat industry.

The novel made Upton Sinclair known throughout the world and today it is recognized for the documentary power and the social change it caused, since a few years later the United States Congress approved the first food safety laws.

"It was four o’clock when the ceremony was over and the carriages began to arrive. There had been a crowd following all the way, owing to the exuberance of Marija Berczynskas. The occasion rested heavily upon Marija’s broad shoulders—it was her task to see that all things went in due form, and after the best home traditions; and, flying wildly hither and thither, bowling every one out of the way, and scolding and exhorting all day with her tremendous voice, Marija was too eager to see that others conformed to the proprieties to consider them herself."

The The Jungle book is available for download in PDF, ePUB and Mobi

Upton Beall Sinclair Jr. was an American writer, muckraker, political activist and the 1934 Democratic Party nominee for Governor of California who...