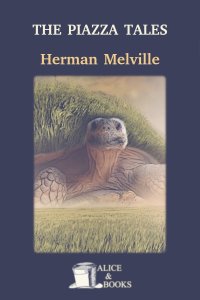 The Piazza Tales is a collection of six short stories written by Herman Melville and originally published in 1856.

Includes three of the most notable stories from Melville's work: Bartleby, Benito Cereno and The Encantadas. The criticism of his time was positive, however that did not translate into a good sales volume that would solve Melville's economic problems.

The following is the list of the six short stories included in the book:

“With fairest flowers,
Whilst summer lasts, and I live here, Fidele—”
When I removed into the country, it was to occupy an old-fashioned farm-house, which had no piazza—a deficiency the more regretted, because not only did I like piazzas, as somehow combining the coziness of in-doors with the freedom of out-doors, and it is so pleasant to inspect your thermometer there, but the country round about was such a picture, that in berry time no boy climbs hill or crosses vale without coming upon easels planted in every nook, and sun-burnt painters painting there. A very paradise of painters. The circle of the stars cut by the circle of the mountains. At least, so looks it from the house; though, once upon the mountains, no circle of them can you see. Had the site been chosen five rods off, this charmed ring would not have been.

The The Piazza Tales book is available for download in PDF, ePUB and Mobi