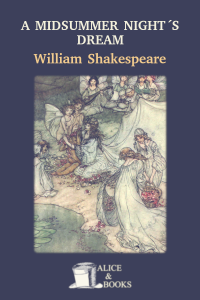 A Midsummer Night's Dream is a comedy written by William Shakespeare and published in 1595. It is one of Shakespeare's most popular plays and has been adapted to film on several occasions.

Set in Ancient Greece, it narrates a series of events at the wedding of Theseus, Duke of the city of Athens, with Hippolyta, queen of the Amazons.

Throughout five acts, different love stories between nobles, comedians and even a group of fairies follow one another and intermingle.

Hermia is betrothed to Demetrio, but she is in love with Lysander but her father does not accept this relationship.

The couple decides to sneak away to the forest to be together, but Hermia tells her friend Helena. But what she did not expect is that Helena would not keep the secret and tell Demetrio since she is in love with him and does it to win his favor. The lovers elope and are pursued by Demetrio and, in turn, by Helena...

The A Midsummer Night's Dream book is available for download in PDF, ePUB and Mobi

William Shakespeare was an English playwright, poet, and actor, widely regarded as the greatest writer in the English language and the worl...