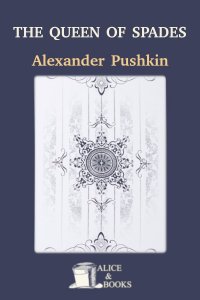 The Queen of Spades Book download in PDF, ePub & Mobi

The Queen of Spades is a short story written by Aleksandr Pushkin about human greed. The tale was first published in the literary magazine Biblioteka dlya chteniya in March 1834.

Hermann, an ethnic German, is an engineering officer in the Imperial Russian Army. He sees how the rest of the army officers engage in gambling, but he never participates.

One night, officer Tomsky tells a story about his grandmother, an old countess who long ago lost a fortune playing pharaoh and recovered it thanks to a secret method.

Hermann becomes obsessed with knowing what the secret was and tries to contact the old countess, through the young caretaker she has at home, who agrees to let him into the house.

The woman tells Hermann that the story is a lie, but he doesn't believe her and threatens her with a gun. The old woman dies of panic and Hermann flees to the apartment of Lizavyeta, the countess's caretaker, located in the same building.

Hermann escapes from the house with the help of Lizavyeta, who is upset to learn that his declarations of love were false and he was only carried away by his greed.

Hermann attends the countess's funeral and suddenly sees the woman's body open her eyes in the coffin and look at him. In addition, that same night the ghost of the countess appears to him. The ghost mentions the three secret cards to him and tells him that he must play only once every night and then orders him to marry Lizavyeta...

This digital edition of the book The Queen of Spades is based on the original edition of 1901 by The Current Literature Publishing Company and translated by H. Twitchell

The The Queen of Spades book is available for download in PDF, ePUB and Mobi

Alexander Sergeyevich Pushkin was a Russian poet, playwright, and novelist of the Romantic era. He is considered the founder of modern Russian literat...