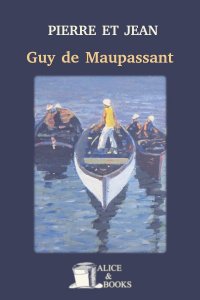 Pierre et Jean is a naturalist work written by Guy de Maupassant and first published in 1887.

This was Maupassant's shortest novel and is a realist work, notably so by the subjects on which it treats, including knowledge of one's heredity, the bourgeoisie, and the problems stemming from money.

Gérôme Roland is a retired jeweler who lives in the French city of Le Havre with his wife Louise. The marriage has two children: Pierre and Jean. The first is a doctor and the second is a lawyer.

The novel tells how the lives of this middle-class family change when a family friend passes away and leaves his inheritance to Jean.

His brother Pierre suspects that his mother was unfaithful and that his brother is not a legitimate son.

He begins to investigate about it and his suspicions are discovered to be correct when he discovers that his mother has hidden that she had a relationship with the deceased friend...

This digital edition of the novel Pierre et Jean is based on Clara Bell's translation.

The Pierre et Jean book is available for download in PDF, ePUB and Mobi

Henri René Albert Guy de Maupassant was a French author, remembered as a master of the short story form, who depicted human lives and destinies an...