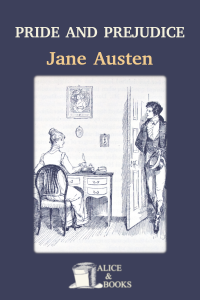 Pride and Prejudice is the most popular novel written by Jane Austen and was published in 1813, initially anonymously.

The book details what life was like for the English bourgeoisie in the 19th century, from the perspective of two very different families and from a very peculiar story. The novel reflects the pettiness of personal relationships as his

The books tells the story of Mrs. Bennet's attempts to marry off her five daughters.

Eligible Mr. Charles Bingley rents the fine house nearby. He may have sisters, but he also has male friends, and one of these, Mr. Fitzwilliam Darcy, irks the vivacious Elizabeth Bennet, the second of the Bennet girls. She annoys him. Which is how we know they must one day marry.

The novel is very popular all over the world, has been translated into more than 30 different languages ​​and has continued to be published, uninterrupted, for more than 200 years. It has been adapted to film, theater or television on several occasions.

The Pride and Prejudice book is available for download in PDF, ePUB and Mobi

Jane Austen was an English novelist known primarily for her novels, which interpret, critique and comment upon the British landed gentry at the end...

The best Pride and Prejudice quotes

To be fond of dancing was a certain step towards falling in love.

It is a truth universally acknowledged, that a single man in possession of a good fortune, must be in want of a wife.

I certainly have not the talent which some people possess, of conversing easily with those I have never seen before.

I could easily forgive his pride, if he had not mortified mine.

A person who can write a long letter with ease, cannot write ill.