Notes from Underground is a novel written by Fyodor Dostoevsky and originally published in 1864. It is one of the most important works of Russian literature.

Written in the form of a dialogue, a man whose identity is unknown and of whom we only know that he is a civil servant, as he introduces himself from the first pages, narrates the memories of his personal tragedy.

The novel is divided into two parts. The first is an interior monologue of the protagonist, a miserable, frustrated and sickly civil servant, who addresses his talk to a non-existent audience. He introduces himself, presents his points of view and, apparently, wants to explain the causes that have originated and made his situation inevitable.

The second part is the narrator's account of a long memory, where the thoughts expressed in the first section, which at times could have been confusing or disorganized, make sense.

Dostoevsky manages to create with him one of the best anti-heroes of all his work, in which the Slavophile roots and the undeniable rejection of bureaucratic imposition are united in a whole treatise.

The novel was written at a very troubled time for Fyodor Dostoevsky, as his wife and brother had recently died, he had been censured by the authorities and his gambling addiction had become more complicated.

The Notes from Underground book is available for download in PDF, ePUB and Mobi 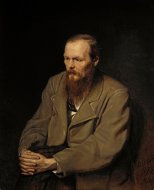 In his work, he explored human psychology in the troubled pol...