Tarzan of the Apes Book download in PDF, ePub & Mobi

Tarzan of the Apes, written by Edgar Rice Burroughs, is the first in a series of novels about the fictional character Tarzan. It was first published in a magazine in 1912 and as a book in 1914.

It all begins in 1888 on an expedition entrusted by the British crown to John Clayton, Lord Greystoke. This expedition intends to visit an African village in what is now Sierra Leone to try to resolve conflicts with the native inhabitants.

Clayton travels there, accompanied by his wife Alice, since she is pregnant and he does not want to miss the birth.

During the trip, some conflicts arise. The captain of the ship intended to assassinate a sailor, Black Michael, whose life Clayton saves and is indebted to him. The rest of the sailors mutiny and Black Michael keeps his promise and lets Clayton and his family live, but they are abandoned on a beach next to the jungle, along with their luggage and some food and tools.

The Claytons manage to survive and build a cabin. There, at three months, Alice gives birth to their child: a boy they call John. However, after the attack of a gorilla Alice is left with mental problems and eventually dies. Clayton is depressed but tries to continue living for his son.

In the jungle there is a tribe of great apes whose leader, Kerchak, kills the son of a member of the tribe named Kala in a fit of rage. A few days later, while exploring the jungle, he finds Clayton's cabin. Kerchak kills Clayton and, hearing the baby crying, Kala goes to him but instead of killing him she adopts him as her own son. She names him Tarzan, which means "white skin" in the Mangani language.

This is the Volume #1 of Tarzan Series

This book belongs to Tarzan Series, #1

The Tarzan of the Apes book is available for download in PDF, ePUB and Mobi 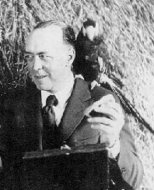 Edgar Rice Burroughs was an American speculative fiction writer, best known for his prolific output in the adventure, science fiction and fantasy g...

The best Tarzan of the Apes quotes

His wild jungle life had inured him to the sight of dead and dying animals.

For myself, I always assume that a lion is ferocious, and so I am never caught off my guard.

Love is a strange master, and human nature is still stranger.

When Tarzan killed he more often smiled than scowled, and smiles are the foundation of beauty.

Around the World in Eighty Days
Jules Verne

A Winter amid the Ice and other Thrilling Stories
Jules Verne

From the Earth to the Moon
Jules Verne